Samsung Workers on the Line: Unique Report Reveals the Lives of Vietnamese Women Workers Making the Samsung Smart Phones in Your Pocket (Updated) 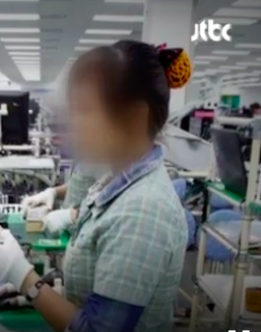 Korean News Network, JTBC, covers report on Samsung workers in Vietnam. Click this link for a translation of the story: http://ipen.org/site/korean-news-jtbc-covers-report-samsung-vietnam

(Göteborg, Sweden) In an unprecedented study on the experiences of women working at two Samsung factories in Vietnam, a new report documents health and workplace violations by the electronics industry giant. The workers’ experiences of fainting or dizziness, miscarriages, standing for eight-to-twelve hours, and alternating day/night shift work are documented in a report released by the Hanoi-based Research Center for Gender, Family and Environment in Development (CGFED) and IPEN, a global network of environment and health NGOs working to reduce and eliminate harmful chemicals.

Samsung dominates the global phone market as well as the electronics sector and economy of Vietnam, where 50% of its smart phones are produced. The electronics sector is a significant area of growth for Vietnam, as electronic products outpace other exports. However, Vietnam has no labor codes specifically protecting the health of electronics industry workers, who are overwhelmingly women.

The study combines industrial sector research and qualitative narratives of 45 workers, and is the first of its kind in Vietnam to shed light on the experiences of the predominantly female electronics industry workers. Because Samsung is notoriously secretive, it offers a rare glimpse into life on the Samsung factory floor.

The study, says the Hanoi-based research group that conducted the research, is a rare opportunity for consumers and policy makers to learn about the harsh working conditions that the female workers making the ubiquitous phones must endure.

“We hope that people buying smart-phones will be more aware of the workers on the assembly lines making their phones,” said Ms. Pham Thi Minh Hang from CGFED. “The women we interviewed endure ongoing labor code violations, workplace dangers and health hazards. All the women reported dizziness or fainting at work. This is not normal. They reported inhumane overtime and intense production demands. Workers are often prevented from speaking out about their working conditions by company rules that claim all expressions about life inside the factory constitute trade secrets. We hope that the information in this report will bring about better protections for workers, and that consumers will demand decent working conditions for workers who make the electronics in their homes and pockets.”

The report underscores the need for better protections for Vietnam’s large and growing electronics work force, and the need for transparency around industrial chemicals used throughout electronics production.

“This study is important because the lives and rights of workers in the electronics industry in Vietnam have been neglected in research and policy,” said Joe DiGangi, PhD., IPEN Senior Science and Technical Advisor. “Companies make a lot of money in Vietnam, but their profits rest on the tired shoulders of the female-majority workforce. Comprehensive regulations should be developed and enforced to ensure worker safety in the electronics industry. Economic development must be concerned not just with GDP, but equally consider impacts on the health of workers and communities in developing and transition country economies where the electronics industry is rapidly expanding.”

Samsung has threatened workers with firing and lawsuits if they speak publicly about their work experiences. In an effort to intimidate CGFED, they have threatened the group with a lawsuit. The company has also publicly stated that they are considering suing IPEN. Samsung has made many false statements in the Vietnamese media about the nature and details of the report. CGFED and IPEN stand by the research which speaks for itself.

The CGFED-IPEN report triggered an investigation of the two Samsung factories by the Ministry of Labour, Invalids and Social Affairs (MOLISA). A news article briefly described the investigation, but MOLISA has not yet publicly released it. The MOLISA investigation confirmed several findings in the report including excessive working hours and lack of proper training. However, large gaps still remain as the MOLISA investigation did not appear to include excessive noise levels, insufficient break time, health effects in workers, and chemical use and monitoring.

Founded in 1993, the Research Centre for Gender, Family and Environment in Development (CGFED) has been carrying out social scientific research and intervention activities, targeting at women’s development and gender equity. As one among the first Vietnamese non-governmental organizations (NGO), CGFED is proud of its work building the foundation and the development of a young NGO community among member of the Vietnamese civil society.

IPEN is a network of non-governmental organizations working in more than 100 countries to reduce and eliminate the harm to human health and the environment from toxic chemicals.