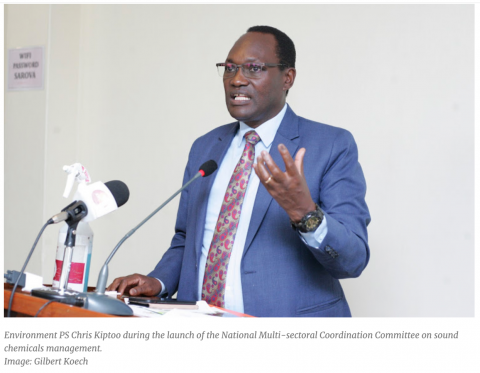 The government has formed a committee to tackle toxic and hazardous chemicals posing risk to Kenyans.

Globally, nations have put in place measures to manage chemicals through voluntary or legally binding instruments.

Toxic and hazardous chemicals are regulated under Montreal, Rotterdam, Minamata, and Stockholm Conventions.

Though not produced in Kenya, importation of chemicals, export and use is not specifically tracked.

This poses risk not only to the people but also to the environment, a move that could risk sustainable development goals. Therefore, on Monday, the government launched a national multisectoral coordination committee on sound chemicals management at Panafric Hotel, Nairobi.

"It will also promote awareness and advocacy on sound chemical management," Kiptoo said.

Kiptoo said the committee was formed following the formulation of the draft Kenya National Chemicals Policy 2020. He said chemicals are important as they play a big role in manufacturing.

The PS said the Environmental Management and Coordination Act, 1999, will be reviewed to strengthen the National Environment Management Authority. The sharing of information on the use of chemicals that are banned and restricted elsewhere remains a challenge.

Other challenges that have seen the presence of chemicals in the environment include the use of chemicals whose long-lasting residual effects are not scientifically proven.

In some cases, users who are poorly informed of the possible harmful effects of chemicals mismanage them. There is also a lack of compliance with formulation procedures, labelling, storage, transportation and application guidelines.

With the new committee, however, some of the challenges will be resolved. The team will promote data collection, analysis, information sharing, and knowledge management to inform decision making.

It will also promote capacity building, prepare joint multi-sectoral project concepts, and implementation of activities. It will also help to raise awareness.

The membership of the committee is drawn from the Environment, Health, Agriculture, Industrialisation, Transport and Labour ministries, the government chemist and Nema.

Others are the Kenya Association of Manufacturers, the Kenya Bureau of Standards, the Centre for Environmental Justice and Development, and the Jomo Kenyatta University of Agriculture and Technology.

The committee will be co-chaired by Environment and Health ministries. It will implement the Kenya National Chemicals policy by working on a systematic and coherent framework for the sound management of chemicals.

The World Health Organization and the Ministry of Health identify predisposing factors for cancer and other non-communicable diseases such as kidney disease to exposure to environmental and occupational carcinogens that include asbestos, petroleum exhaust gases, and ionisation, and ultraviolet radiation.

Health PS Susan Mochache said in a speech read on her behalf that non-communicable diseases are on the rise. She said a quarter of diseases are due to environmental factors.

"The committee will help support universal healthcare," she said.

Data from the Kenya National Bureau of Statistics showed that the country is experiencing an epidemiological transition in its disease burden from infectious to non-communicable conditions, resulting in double the burden of disease.

Non-communicable diseases account for 27 per cent of the total deaths and over 50 per cent of total hospital admissions. The major NCDs are cardiovascular conditions, cancers, diabetes, and chronic obstructive pulmonary diseases.

The STEPs 2015 survey in the country estimated that cancer is the second leading cause of NCD-related deaths after cardiovascular diseases accounting for seven per cent of overall national mortality.

Air, soil and water pollution with carcinogenic chemicals account for one to four per cent of all cancers.