At UN meeting, governments agree to a global ban on PFOA – a toxic water pollutant 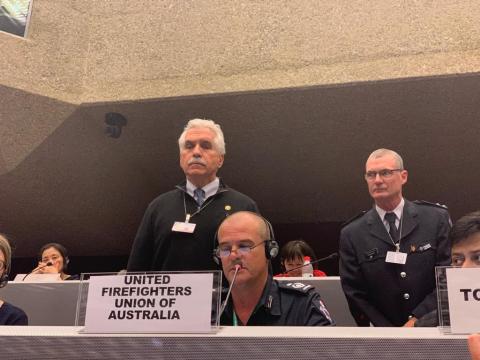 (Geneva, Switzerland): Governments at the 9thConference of the Parties (COP9) of the Stockholm Convention agreed to a global ban on PFOA – a chemical that does not break down and causes adverse health effects at background levels. The uses of PFOA and other fluorinated organic compounds (PFAS) are widespread across many industrial and domestic applications.  Fluorinated firefighting foams are a leading cause of water contamination with toxic chemicals that pollute breast milk and are associated with cancer, endocrine disruption, and harm to fetal development.

Unfortunately, governments also included a large number of unjustified five-year exemptions for PFOA use in semiconductor manufacturing, firefighting foams, textiles claimed to protect workers, photographic coatings for films, and medical devices. Surprisingly, China, European Union and Iran obtained additional wide-ranging exemptions for fluorinated polymers, medical textiles, electrical wires, and plastic accessories for car interior parts. All three countries participated in the evaluation process, but suddenly asked for the additional exemptions at the meeting. Even the fluorochemicals industry repeatedly opposed these additional exemption requests due to the wide availability of alternatives.

Governments placed special controls on PFOA-containing firefighting foams, prohibiting production, export or import and not permitting their use in training – a large source of water pollution. In addition, they warned against using the entire class of PFAS substances because they, “could have negative environmental, human health and socioeconomic impacts due to their persistency and mobility.” Before the meeting, industry fire experts and firefighters released a new report demonstrating that cost effective fluorine-free firefighting foams meeting regulatory standards and have been widely adopted by world-class airports and major companies.

“From a firefighter’s perspective, we know we have significantly raised PFAS levels in our blood,” said Commander Mick Tisbury, Melbourne Metropolitan Fire Brigade, and United Firefighters Union (UFU), Australia. “We feel we have a ticking time-bomb in our bodies; we do not know when it will explode or even if it will explode - we just want the bomb removed!”

“Governments should listen carefully to industry fire safety professionals and firefighters who actually put out fires and rapidly move to phase out fluorinated firefighting foams,” said Pamela Miller, IPEN Co-Chair. “Water is a precious resource and clean water a fundamental human right. Now is the time to fulfill the Stockholm Convention’s protective objective and stop polluting it.”

Governments placed a new five-year deadline to end PFOS use in firefighting foams and prohibited its production, export or import and use for training.

“These loopholes should have never been approved in the first place,” said Joe DiGangi, IPEN Senior Science and Technical Advisor. “But sharply prohibiting PFOS puts another nail in the coffin of PFAS use and pollution.”

Unfortunately, use of a toxic pesticide, sulfluramid, which degrades to PFOS, continues with no time limit. Sulfluramid use has proliferated widely in Latin America, causing widespread PFOS pollution.

"The continued use of sulfluramid in agriculture with no time limit protects Brazilian chemical companies, not human health and the environment,” said Fernando Bejarano, IPEN Hub for Latin America. “Governments should transition to agroecological techniques and ban this pollution source as soon as possible.”

Reporters and Editors, please contact LauraVyda@ipen.org for additional information and to arrange interviews with industry experts and authors of the report.