Health and community leaders from across the globe are serving organic coffee, cashews and chocolate — free of the pesticide endosulfan — to Stockholm Convention delegates in Geneva. At the gathering this week the governments will decide whether to include the  persistent insecticide in the Convention, which would ban it in the 173 countries that are  Parties to the treaty. Annex A Cafe Press Release 26 April, 2011 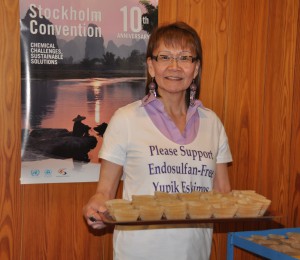 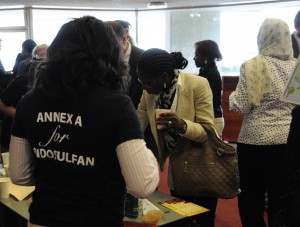 The Global Indigenous Peoples Caucus attending COP5 hosted a side event in Geneva during lunchtime on Wednesday, 27 April:

Salmon from Alaska was served to attendees as well as organic, endosulfan-free coffee.

….and presentations from the event:

The Stockholm Convention and Indigenous Peoples’ Human Rights, Community Health, and Survival (Challenges and Solutions Ten Years After the POPs Treaty Adoption), given by Vi Waghiyi.

Indigenous Peoples, Human Rights and the Stockholm Convention, given by Andrea Carmen

Third meeting of the intersessional process for SAICM beyond 2020

2nd Meeting of the Intersessional Process for SAICM beyond 2020

1st Meeting of the Intersessional Process for SAICM beyond 2020