On 6 December in Nairobi, IPEN released a new report showing high mercury levels among Minamata COP1 delegates. Researchers from IPEN (a global public health and environment network) and BRI (the Biodiversity Research Institute) analyzed mercury levels in hair samples from 180 delegates (104 women and 76 men) from 75 countries who participated the COP1 of the Minamata Convention in Geneva from September 24-29th, 2017. The findings revealed mercury in all participants and elevated mercury levels exceeding the US EPA health advisory level of 1 ppm, above which brain damage, IQ loss, kidney and cardiovascular damage may occur, in over half of the study participants. Levels many times higher were identified in delegates from a number of regions. Read information about the release here . 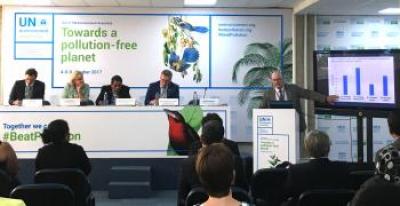 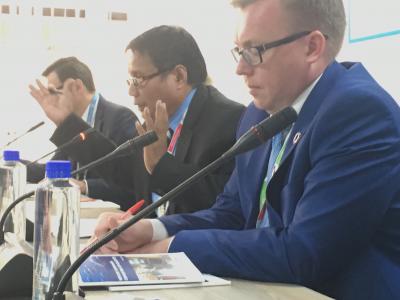 On 5 December, IPEN Co-Chair Olga Speranskaya gave a presentation at the Multistakeholder dialogue at UNEA3 during a segment titled, "How Does Pollution Affect Us?" Olga's presentation covered the impact of pollution, specifically as it affects women, a population that has become particularly vulnerable to toxic chemical exposure.

"Throughout their lives, men and women are exposed to numerous harmful chemicals. But chemicals in women’s body can be transferred across the placenta during fetal development and through breast milk to the nursing baby. Exposures during fetal development can cause lifelong diseases and disabilities and increase the risks of irreversible harm. Adverse effects can also be carried across multiple generations." 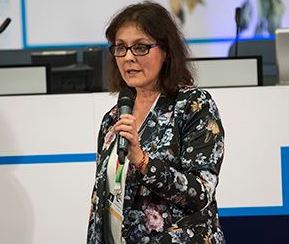 During a side event about the rising environmental pollution and human rights violations from the energy and extractive industry, IPEN partner, Peninah Atwine from EMLI-Uganda shared her experience with gold mining and mercury use in mining sites in the Buhweju District Mining sites in Uganda. Peninah noted that mining activities are intensifying under working conditions that are not environmentally sound.

The following are some highlights from Peninah's presentation: 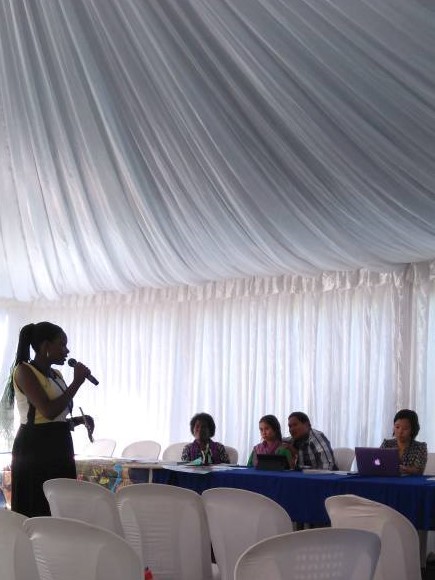 From 15:30 - 16:15 today in Nairobi, IPEN and United Nations Environment Programme (UNEP) held a press conference to announce a new partnership. The overall theme of the IPEN - UNEP Partnership is to contribute to the work on Gender and Chemicals, through a focus on women in the following areas :

IPEN Co-Chair Dr. Olga Speranskaya opened the press conference with a statement on the partnership, reminding attendees: "There are nearly 4 billion women and girls on the planet. Despite the fact that women make up roughly half of the population and chemical exposure is widespread, knowledge of exposure routes and the true impacts of chemical exposures on women aredifficult to determine because there is a lack of gender-disaggregated data." Read her entire statement here.

To learn more about the speakers and the partnership, please see this introduction . 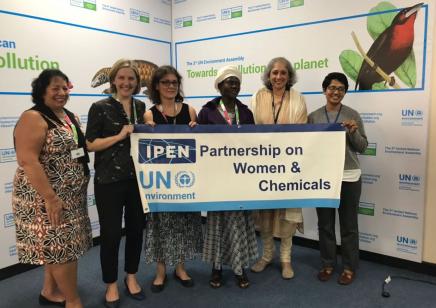 IPENer Phyllis Omido (Center for Justice, Governance and Environmental Action- CJGEA, Kenya) participated in an event about environmental defenders: Stories from the front line of environmental protection. She was joined by John Knox (UN Secretary General’s Special Rapporteur on Human Rights and the Environment), Julius Opiyo (Global Witness), and Laetitia Zobel (UN Environment expert on indigenous people’s issues). For some background to the subject, please see : Global Witness Defenders of the Earth campaign .

Women and Chemicals Side Event

On 5 December , WECF , Balifokus , IPEN , and partners will premiere the film, "What Does Gender have to do with Chemicals?" during an event at UNEA3.

The documentary film addresses chemical and waste pollution areas, and looks at best practices from a gender perspective in Nigeria and Senegal. After the film, IPEN Steering Committee member Yuyun Ismawati from Balifokus will participate in a panel discussion on the topic of Strengthening Gender Policies for a Toxics-free Planet. At the conclusion of the panel, there will be a celebration of a new partnership on Women and Chemicals between IPEN and UN Environment. To see the flyer, visit this page .

A new video has been released by UN Environment at the 3rd Meeting of the United Nations Environment Assembly featuring Minamata Disease survivor, Ms. Shinobu Sakamoto.

Shinobu calls for an end to pollution: "The fetal Minamata disease patients including myself are getting worse, year by year. Many people are still suffering and struggling from pollution. Today, I must repeat my message--Minamata disease is not over. Pollution must end."

The video is the result of a collaboration between Shinobu’s team, who attended the first Conference of the Parties to the Minamata Convention in Geneva, UN Environment and IPEN.

Prior to her participation in COP1, Shinobu launched the Honoring Minamata Campaign at the Mercury Treaty INC2, together with IPEN and Citizens Against Chemicals Pollution, Japan

IPEN Co-Chair Olga Speranskaya participated in a panel on Chemicals and Waste at the Global Major Groups and Stakeholders Forum 27-28 November 2017, highlighting that children today are born already contaminated with hundreds of man-made chemicals and emphasizing the urgent need for strong global bans on toxic chemicals. 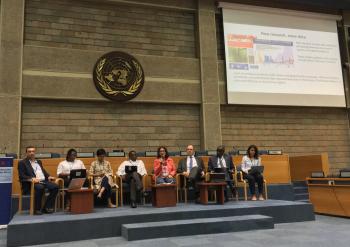 Semia Gharbi and David Azoulay, representatives from IPEN Participating Organizations AEEFG and CIEL , spoke on a panel at the Global Major Groups and Stakeholders Forum to address Marine Pollution. The panel was moderated by Sascha Gabizon from WECF . Plastic pollution was a topic specifically emphasized, and representatives from the #BreakFreeFromPlastic member groups spoke on the development of the Break Free From Plastics movement. Solutions to address the problem of pollution in the ocean were discussed.

IPEN has participated in the first two UN Environment Assemblies, and will now be participating in the third. Find out more about this year's Assembly here .

See IPEN's Views of Selected Issues to be discussed at UNEA3 for information about IPEN's positions on specific resolutions.

Events of the meeting will be as follows:

4 December 2017 Press Conference Introduction
Statement on the Partnership between IPEN and UNEP with the focus on women and chemicals
CIEL UNEA Side Event Flyer: The reality of plastic pollution and solutions to address it
IPEN Views of Selected Issues at UNEA3