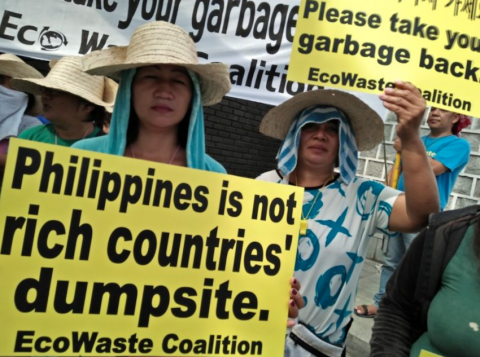 Two civil society organizations from Malaysia and the Philippines urged the 10 member states of the Association of Southeast Asian Nations (ASEAN) to declare the entire region as “no dumping ground” for hazardous wastes and other wastes such as household and plastic garbage.

The Consumers’ Association of Penang (CAP) and the EcoWaste Coalition together called for a robust ASEAN-level policy that will protect the region’s over 655 million people and their rich but threatened biodiversity and ecosystems from the adverse impacts of global waste dumping.

The groups’ plea for a regional stance to prevent foreign waste dumping came on the heels of the prestigious Asia Environmental Enforcement Awards (AEEA) given to recipients from Malaysia and the Philippines who were recognized for their work in combating transboundary environmental crime, which resulted in the re-exportation of unlawful plastic waste imports to their countries of origin.

“The AEEA conferred to environmental enforcers in Malaysia and the Philippines has again turned the spotlight on the illegal traffic of waste in Asia and the need for greater collaboration and vigilance, nationally and regionally, to put an end to such an environmental crime,” said Mageswari Sangaralingam, Researcher, CAP.

“To protect the region from the environmental and health impacts of waste trade, all the ASEAN member states should immediately ratify the Basel Convention Ban Amendment and fix regulatory loopholes if any that ‘legalize’ the entry of hazardous wastes and other wastes disguised as recyclable scraps. Regionally, we urge the ASEAN to adopt a declaration, or better still an agreement, proclaiming the region as no dumping ground for foreign waste,” said Aileen Lucero, National Coordinator, EcoWaste Coalition.

“Now is the time for the ASEAN to flex its muscles as a regional bloc to denounce global waste dumping and affirm its unity to safeguard the region’s people and the environment from the drawbacks and hazards of waste trade,” said Chinkie Peliño-Golle, Regional Coordinator, International Pollutants Elimination Network – Southeast and East Asia (IPEN-SEA).

Brunei, as chair of the ASEAN for 2021, should use its positive influence to promote the expeditious ratification of the Basel Convention Ban Amendment by countries in the region, the groups said. To date, only Brunei, Indonesia and Malaysia from Southeast Asia have ratified the said amendment banning all exports of hazardous wastes from developed to developing countries. The amendment finally entered into force on December 5, 2019.

The Enforcement Division of Malaysia’s Department of Environment obtained the award for actions taken to return over 200 containers of illegal plastic waste imports to exporting countries, including USA, UK, France and Canada, and for closing illegal plastic recycling factories in the country.

The district collector of the Bureau of Customs in Northern Mindanao, John Simon, was cited for the seizure and eventual repatriation of illegal waste shipments from South Korea totaling 364 containers of wrongly declared “plastic synthetic flakes,” which turned out to be contaminated mixed waste. Last January 19, the EcoWaste Coalition honored Simon with the group’s first-ever “Environmental Justice Award” for the same feat.

1. The Basel Convention Ban Amendment, adopted in 1995 and which entered into force in 2019, prohibits all exports of hazardous wastes from developed to developing countries for any reasons such as for reuse, recycling, disposal or recovery operations.

2. Among the 10 ASEAN member states, only Brunei, Indonesia and Malaysia have ratified the Basel Convention Ban Amendment to date.