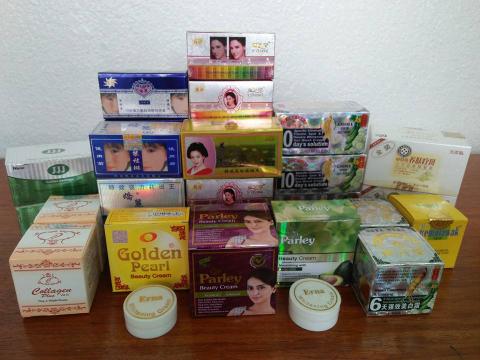 Government Urged to Go After Importers, Distributors and Retailers of Toxic Cosmetics

The EcoWaste Coalition and Laban Konsyumer, Inc. made the exposé ahead of the first Conference of Parties (COP1) to the Minamata Convention on Mercury on September 24 to 29 in Geneva, Switzerland.

The Minamata Convention, an international treaty, aims “to protect the human health and the environment from anthropogenic releases of mercury and mercury compounds.”  Among other things, it targets the phase-out of skin lightening products with mercury above one part per million (ppm).
“Contraband cosmetics containing mercury continue to be sold in several beauty product and Chinese medicine stores with their importers, distributors and retailers brazenly doing it with impunity.  Some retailers even give official receipts for illegal purchases,” observed Thony Dizon, Coordinator of the EcoWaste Coalition’s Project Protect.

“While the Minamata Convention sets a 2020 phase-out date for mercury-containing skin lightening creams and soaps, Southeast Asian countries, including the Philippines, ban mercury in excess of 1 ppm under the heavy metal limits of the ASEAN Cosmetic Directive that were adopted in 2007,” he said.

To put an end to the illegal trade of mercury tainted cosmetics, the EcoWaste Coalition urged the government to crack down on smugglers through effective law enforcement activities.

Laban Konsyumer, Inc. echoed the EcoWaste Coalition’s call stressing the right of consumers to be protected against hazards to health and safety as guaranteed by the Consumer Act of the Philippines.

“We urge the authorities to prosecute those behind the illicit trade of mercury-containing skin whiteners and other cosmetics without the prerequisite product notifications.  Punishing the culprits to the fullest extent of Republic Act 9711 will send a strong message that our country is serious about protecting our consumers against mercury exposure via cosmetic use,” said Atty. Victorio Dimagiba, President of Laban Konsyumer, Inc.

RA 9711, or the Food and Drug Administration (FDA) Act, states that any person who violates the law shall, upon conviction, suffer the penalty of imprisonment from one to not more than 10 years or a fine of not less than P50,000 but not more than P500,000.  Stiffer penalties and fines await erring manufacturers, importers or distributors.

To draw attention to the continued proliferation of mercury-laden skin lightening products in the market,  the EcoWaste Coalition conducted test buys from September 16-21 covering 12 cities in Metro Manila and the provinces of Batangas, Bulacan, Laguna, Pampanga and Rizal.

Out of 35 products procured for P60 to P240 each and screened for mercury using an X-Ray Fluorescence device, 33 were found to contain mercury up to 46,000 ppm.

Several variants of Jiaoli and S’Zitang, the two most commonly available imported skin whitening creams, were found to contain mercury ranging from 591 to 4,719 ppm.

Both the EcoWaste Coalition and Laban Konsyumer appealed to the governments of China, Taiwan, Pakistan and others where the mercury-containing cosmetic imports are coming from to collaborate with the Philippine authorities to halt the illegal trade.

The country’s ratification of the Minamata Convention should help in promoting closer collaboration between governments in enforcing mercury control measures, including the phase-out of mercury-added products, the groups said.

According to the FDA, “mercury salts in cosmetic products inhibit the formation of melamin in the skin, resulting in a lighter skin tone.”

“There have been cases of adverse health effects brought about by highly toxic mercury in cosmetic products, such as kidney damage, skin rashes, skin discoloration and scarring,” it warned.

“The transfer of mercury to fetuses of pregnant women may manifest as neurodevelopment deficits later in life,” the agency further warned.

The FDA has banned over135 mercury-containing skin lightening creams since 2010, including  80 brands that were discovered by the EcoWaste Coalition through its periodic market monitoring and chemicals in product analysis.

In 2015, the EcoWaste Coalition released the report “Beauty and the Risk,” co-published with IPEN (a global NGO working for safe chemicals policies and practices) showing the prevalence of mercury-tainted contraband skin whitening creams in the Philippines.

”Beauty and the Risk (A Civil Society Investigation on the Prevalence of Mercury-Laden Skin Whitening Creams in 50 Cities in the Philippines),” EcoWaste Coalition/IPEN, 2015