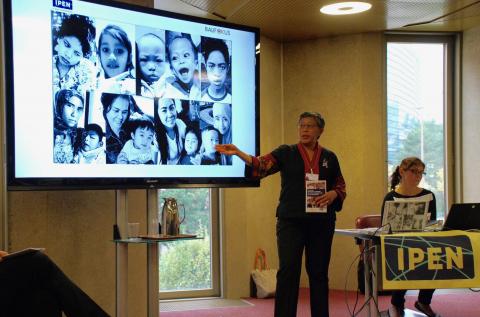 Geneva Switzerland : IPEN, a global network of health and environmental NGOs, have brought together a mercury poisoning survivor from Minamata, Japan with researchers who have just exposed alarming levels of mercury in women of child-bearing age across the globe. Testimony was heard from Ms. Shinobu Sakamoto, who sustained significant neurological damage from in-utero mercury poisoning when her mother, like thousands harmed or killed by industrial mercury in Minamata Bay, consumed mercury-contaminated fish. Ms. Sakamoto called on government delegates to the Minamata Convention to take strong action to bring an end to global mercury poisoning and ensure there are no more Minamatas. Specifically, Convention delegates must end the global trade in mercury that is feeding small scale gold mining, drive down coal-fired power emissions and clean up contaminated sites. The Minamata Convention on Mercury commemorates the world’s most infamous mercury poisoning episode in Minamata Bay, Japan as a reminder of mercury’s devastating effects, and to catalyze action to prevent future Minamata disasters. Mr. Yoichi Tani , advisor for the past 40 years to a surviving community of Minamata Disease sufferers said, “Minamata is still a contaminated site. There are many Minamata disease victims struggling to be recognized and compensated. The situation in Minamata is not resolved.”

Researchers Mr. Lee Bell (MA ESD) and Mr. David Evers , PhD., authors of the global study, Mercury in Women of Child-bearing Age in 25 Countries , discussed their findings of dangerous, wide-spread mercury contamination in women of child-bearing age and the implications for future generations. Analysis of hair samples from 1044 women of reproductive age in 37 locations across 25 countries on 6 continents revealed that 42% of women sampled had mercury levels over the US EPA limit level of 1 ppm, above which brain damage, IQ loss, and kidney damage may occur. Additionally, 53% of the global sample exceeded the level 0.58 ppm of mercury, a level now associated with the onset of fetal neurological damage. Exposures were higher and more pervasive in communities near mercury gold mining, in the Pacific Islands, and in communities near industrial contamination.

“We are seeing a mercury public health crisis unfolding,” said Lee Bell , study author and IPEN Mercury Policy Lead. “If we are truly committed to ending mercury poisoning, then we have to take steps to stop mercury at its source. This means replacing coal-fired power that is responsible for mercury contamination of the oceans, fish and people who depend on fish with clean alternatives for energy generation.”

Ms. Yuyun Ismawati is a Goldman Environmental Prize winner, IPEN Lead for ASGM / Mining and BaliFokus Foundation Advisor. Ms. Ismawati put faces to the dramatic number of men, women and children with high mercury levels in gold mining communities in Indonesia, where 95% of women whose hair was sampled were shown to have levels exceeding the 1 ppm limit value.

Sharing photos and testimonies of children with painful neurological and physical impacts from fetal and early childhood exposures to mercury from gold mining activities, Ms. Ismawati called for collective global action to end the mercury trade and use in ASGM that is still permitted under the MInamata Treaty. “The Minamata Treaty has failed subsistence gold miners by allowing the international trade of mercury to continue, and mercury continues to flow into countries where this activity occurs. Although, globally, in the last 5 years the amount of mercury traded has been declining, cheap, locally produced and available mercury is easily accessible by miners in Indonesia, Mexico and the Latin American region. Gold traders will continue to profit at the expense of women, children and future generations, with limited benefit for the communities.”

Advocates say the Pacific Islands are the canary in this coal-based crisis. Ms. Imogen Ingram of the Island Sustainability Alliance Cook Islands learned that her own mercury levels were more than twice the US EPA limit level. Addressing the situation of women in Pacific Islands where 8 out 10 women sampled had mercury levels exceeding 1 ppm, Ms. Ingram said, “No mother should have to learn that they unknowingly passed toxic mercury to their developing child.”

IPEN is a network of non-governmental organizations working in more than 100 countries to reduce and eliminate the harm to human health and the environment from toxic chemicals and heavy metals.

Minamata Disease and Mercury Pollution: Past, Present, and Future

Press Entry: Press must either be accredited journalists to the Palais, or register directly for the meeting with suitable accreditation (a press card and a letter from their organization indicating that they are covering the meeting). 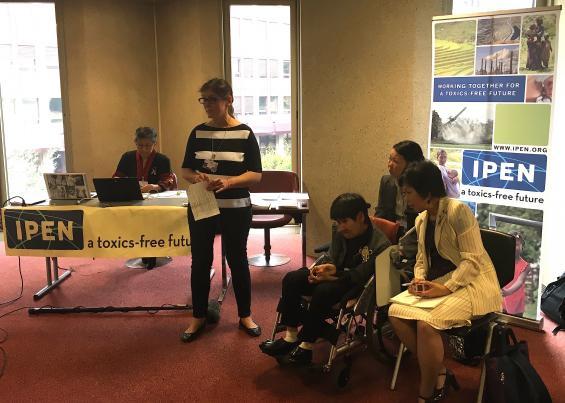 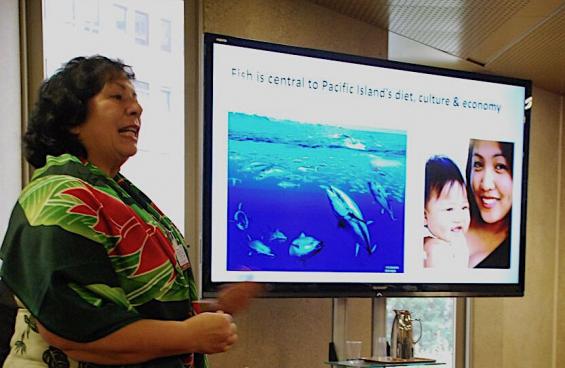