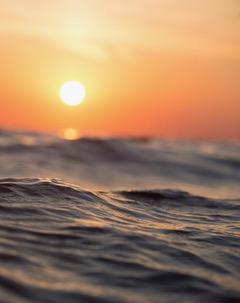 Life on earth is utterly dependent on healthy oceans. They produce much of the oxygen we breathe, cycle the carbon dioxide, and regulate the weather we experience. Perhaps it is the vastness of the oceans that has made us complacent about its capacity to keep absorbing our toxic wastes?

After a year of global ocean meetings, the international community is finally facing up to the reality of polluted, depleted oceans.

Policies to protect the marine environment that do not address the finite nature of our world will fail.

Toxic waste has been pouring into our oceans since the industrial revolution. Oceans have been treated as bottomless pits — the “away” place where industrial and domestic wastes are sent to “disappear.” As the giant global sump collecting our sewage, rubbish, pesticides, run-off, and industrial emissions — it appears the oceans’ generosity has reached critical limits.

There is no hiding. Plastics and chemical pollutants now contaminate the most remote and deepest parts of the ocean. Despite the global ocean covering 71 percent of the earth’s surface and holding 97 percent of the earth’s water, scientists have found that tiny shrimp inhabiting the vast, remote depths of the Mariana Trench are loaded with toxic polychlorinated biphenyl — or PCBs — and brominated flame retardants at levels comparable to the world’s contaminated industrialized regions.

We recently compiled a comprehensive report, “Ocean Pollutants Guide — Toxic Threats to Human health and Marine Life,” detailing the twin plastic and pollution problem that is dramatically impacting the health of marine ecosystems everywhere. While marine plastic pollution has garnered the world’s attention with the visuals of giant gyres of plastic and soupy layers of microplastics, it is the invisible and persistent pollutants contaminating the marine environment and hitchhiking on plastics that have created a toxic timebomb.

Highly persistent chemical pollutants are already altering the reproduction and behavior of marine animals and impacting their immune systems, making survival even harder by altering their capacity to respond to disease.
No place is safe. Most of the global land surface is connected to oceans via river systems — chemical and plastics pollution everywhere is inextricably linked to ocean pollution. Direct dumping of wastes and atmospheric transport of volatile chemicals also contributes to the oceans’ woes.

Who will speak up for the oceans?

Regulations, where they exist at all, seek to limit pollution by setting “safe” emission levels for each chemical, ignoring the reality of the complex cocktail of chemicals. The ides of safe levels is based on the notion there is endless capacity for all pollution to be diluted. But you can’t keep adding persistent and bioaccumulative chemicals to a finite body of water and expect it to simply disappear. Pollutants interact and concentrate, some never break down and many end up at the top of the food chain in apex animals such as orcas and sharks.

The toxic impacts of ocean pollutants such as PCBs, dichlorodiphenyltrichloroethane, or DDT, and the anti-fouling paint known as tributyltin, have been known for decades. More recently, scientists have raised concerns about perfluorinated “forever chemicals,” such as perfluorooctanoic acid and perfluorooctanesulfonic acids, or PFOAs and PFOS, that now contaminate seawater samples from the Pacific to the Arctic Ocean. Other chemicals regularly turning up include endocrine — hormone-disrupting compounds — pesticides, pharmaceuticals, personal care products, oil, and mercury from mining and coal-fired power.

Around 20 billion tons of waste per year ends up directly in the oceans. With the world population projected to reach 9.7 billion by 2050, we simply can’t continue on this trajectory and expect life on land and in the oceans to survive and thrive. The fossil fuel industry has its sights set on massive increases in plastic production into the future, while the petrochemical industry continues to grow steadily at around 4 percent per year.

While chemical production continues to ramp up, the worsening impacts of climate change add another layer of urgency. Ocean acidification, algal blooms, and diminishing water oxygen levels creating oceanic “dead zones” also handicap the adaptability of animals trying to survive in a rapidly changing environment. Polar regions, once considered environmental sinks for some of the most toxic pollutants, are fast becoming new sources of recontamination as the ice melts.

Remote and subsistence communities, such as Arctic and Pacific Island peoples, who are highly dependent upon the ocean for food and culture are already suffering disproportionately with elevated mercury levels, increased chronic diseases, and diminished fish populations.

Governments in some countries are now advising pregnant women to limit their intake of certain fish for fear of pollution impacts on their unborn child. When pregnant women need to fear eating fish, you know we are facing an existential threat. Addressing ocean pollution is complex and requires a deep change to the status quo.

The United Nations Sustainable Development Goal 14 set a target to prevent and significantly reduce marine pollution of all kinds by 2025. This helped crystallize an international response to ocean pollutants. In February 2017, the U.N. Environment Programme launched #CleanSeas with the aim of engaging governments, the general public, civil society, and the private sector in the fight against marine plastic pollution.

Urgent and concerted efforts are needed to clean up contaminated sites and polluted waterways. We must address not only our past pollution but our current unsustainable levels of consumption, resource extraction, waste production, and of course, climate disruption. Policies to protect the marine environment that do not address the finite nature of our world will fail.

We need to decontaminate the materials supply chain in order that a true “circular economy” can safely reuse materials. We must do away with the idea of “waste,” which is essentially design failure. Corporations must be held accountable and stopped from creating harmful chemicals. When industry is no longer able to externalize the costs of their pollution, they will be forced to change production, stop their toxic emissions and clean up their wastes, driving genuine sustainable innovation.

The principle of “right-to-know” about chemicals in products, their use, and their wastes must be enshrined in law and not hindered by unwarranted claims of commercial confidentiality. The application of the environmental precautionary principle in assessing the impacts of chemicals as well as the substitution with far safer chemicals is well overdue.

We must implement the principle of “no data no market.” If industries and governments are unwilling to generate the information to show a chemical or product is safe, then it has no place in the marketplace.

Policy, regulation, and actions must also be grounded in the fundamental principles of social, environmental, and intergenerational equity. The overdeveloped world cannot continue to dump its wastes in the developing world under the pretext of recycling. Nor can we continue to recycle plastics containing toxic chemicals into children’s products, arguing the levels are low and therefore safe.

After our report went to press, a new study was released that predicts the collapse of orca populations as a result of PCB contamination. Humans are not unlike orcas. We too are at the top of the food chain and bioaccumulate toxic chemicals, just like our cetacean cousins. But unlike the orcas, we can do something about it.

Joanna Immig is coordinator of the National Toxics Network, a freelance writer and photographer.