Bangkok - A mountain of plastic and electronic waste appeared on the streets of central Bangkok today as delegates from the 10 member-states of the Association of Southeast Asian Nations (ASEAN) arrived in the Thai capital for the start of the 34th ASEAN summit.

Activists from Greenpeace and other environmental and community groups held banners saying ‘no space for waste’ as they unveiled the spectacle outside the Ministry of Foreign Affairs of Thailand, which has been chosen as the ASEAN-National Secretariat, a major focal point during this week’s talks. They called on ASEAN leaders to declare an immediate ban on the transboundary trade in hazardous electronic and plastic wastes - without exception.

Phansupha Daengpradap from Nongchumphon-nuea community of Phetchaburi province said: “We are here today to reclaim our rights to the environment and demand that Thailand, as ASEAN Chair, put the issue of waste and the waste trade on the table.”

Following public pressure from Thai civil society, Thailand’s government has, in principle, committed to a ban on imports of hundreds of hazardous substances present in plastics and electronic waste - though definitive timelines for implementation, phase-in, and final chemical specifications have remained undisclosed.

However, on Wednesday the Thai government took this a step further by suggesting it would be open to ‘a coordinated and unified’ ban on plastic waste. Busadee Santipitaks, a spokeswoman for Thailand’s Ministry of Foreign Affairs, told the international multimedia agency, Voice of America [1], that "If there is a concerted effort, we are fully supportive of it. In principle, I think all countries are concerned with the trade of plastic waste ...and we probably would not like to see these things happen."

In an open letter to the Royal Thai Government as ASEAN Chair, Thai civil society has made these further demands.
• Put an end to the Factory Act B.E.2019 [2]
• Based on input from public consultations so that, at a minimum:
o Permitting of new facilities is subject to public hearings and input
o Licensing procedures are based on commitments to sound environmental management guarantees
o Compliance with environmental, health and safety regulations are guaranteed through strict, systematic enforcement mechanisms; and
o Emission inventory and chemical pollutant release data is recorded and accessible to the public

Penchom Saetang, Director of Ecological Alert and Recovery Thailand (EARTH) said: “Although high profile one-time spot-checks of industrial sites by Thai authorities, where e-waste and plastics from abroad were being illegally handled for domestic processing, received headline media attention in 2018, no information about follow-up procedures to ensure legal compliance has ever been disclosed. Systematic efforts to undertake such investigations of facilities remain to be established. This lax regulatory environment is now being further exacerbated by recent amendments to the national Factory Act, signed into law in April 2019”

As the current chair of ASEAN, Thailand has chosen “Advancing Partnership for Sustainability” as the theme of this meeting. With this in mind, ASEAN people should demand no less than for their leaders to put the issue of waste and the waste trade on the table during talks this week in Bangkok.

As Tara Buakamsri, Country Director of Greenpeace Thailand explains: “This is a timely opportunity and a test of ASEAN’s leadership and relevance. By stopping waste importation and implementing strong plastic reduction policies, the ASEAN region is in an ideal position to help spur a transformation of the global economy, forcing the global north to rethink its own waste generation and to end all waste exports.”

This week, Greenpeace Southeast Asia launched a petition [3], NO SPACE FOR WASTE, calling on ASEAN leaders to end the region’s plastic waste crisis.

Meanwhile, Ecological Alert and Recovery Thailand has published a report titled ‘Trading Away Health and the Environment: The Toxic Business of Waste Imports into Thailand’ [4] which takes stock of the increase in plastics and electronics waste imports into Thailand since 2014, and the devastating impacts it is having on communities, particularly those in provinces with direct access to seaports. 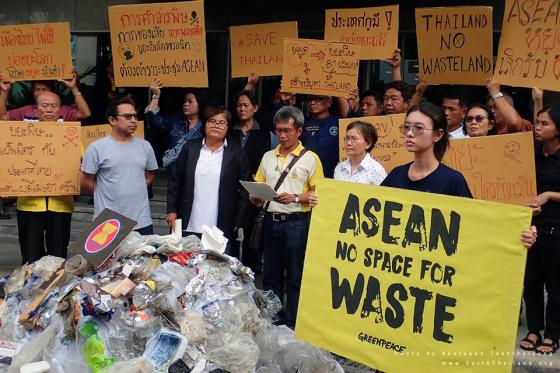