10 May, 2019, Geneva, Switzerland — Today, 187 countries took a major step forward in curbing the plastic waste crisis by adding plastic to the Basel Convention, a treaty that controls the movement of hazardous waste from one country to another. The amendments require exporters to obtain the consent of receiving countries before shipping most contaminated, mixed, or unrecyclable plastic waste, providing an important tool for countries in the Global South to stop the dumping of unwanted plastic waste into their country.

After China banned imports of most plastic waste in 2018, developing countries, particularly in Southeast Asia, have received a huge influx of contaminated and mixed plastic wastes that are difficult or even impossible to recycle. Norway's proposed amendments to the Basel Convention provides countries the right to refuse unwanted or unmanageable plastic waste.

For the Basel COP14, Norway proposed amendments to the annexes to the Basel Convention to bring problematic plastic waste streams within the scope and control of the Convention. EIA, CIEL, IPEN and BAN prepared a short legal explanation of what the proposal would entail. Find the explanation here.

Basel Action Network, CIEL, IPEN, Break Free From Plastic and other civil society NGOs at the meeting shared photos showing the extent of waste dumping with delegates and spoke with them to urge them to support the Norwegian Amendment. 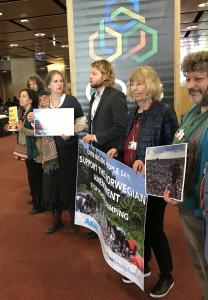 In the run-up to the Basel Convention's 14th Conference of the Parties (COP14), IPEN worked with Basel Action Network (BAN) to complete a "Quick Views" document that addresses some issues that will be discussed at the COP14. These include marine litter and microplastics; financial resources; compliance; e-waste guidelines; POPs waste; technical guidelines on incineration, engineered landfill, hazardous waste physico-chemical treatment and biological treatment; and more.